Sarawak Chief Minister Comes Up With Slogan For State Election

“Give me a chance,” said Tan Sri Adenan Satem when asked about his slogan for the next state election.

The Sarawak Chief Minister said he needed at least several years to achieve his vision for Sarawak, admitting that he could not do it alone adn needed the cooperation of every resident in the state.

“So, ‘give me a chance’, is the slogan (for the election),..I hope to get a mandate from the people to continue with my mission,” he was quoted as saying in an interview with the Jiwa Bakti newspaper. 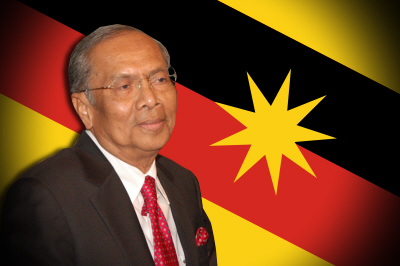 Jiwa Bakti is a monthly newspaper published by Parti Pesaka Bumiputera Bersatu (PBB) which has now been re-published printed after stopping for a decade, and would be distributed for free tomorrow. Bernama has already obtained a few copies.

The end of last month marked Adenan’s one year as Chief Minister after succeeding Tan Sri Abdul Taib Mahmud who is now the state’s governor. The current State Assembly’s tenure ends in June next year.

The slogan “Give Adenan a Chance” prior to this was used in the Balingian by-election which was held following the resignation of Taib as its assemblyman.

The slogan is seen as successful as the PBB’s candidate Yussibnosh Balo won by a bigger majority compared to previously.

Meanwhile, with reference to the births of the UPP and Teras parties, which were splinters of state Barisan Nasional components, SUPP and SPDP, Adenan was quoted by the paper as saying, such matters must be solved before the state general, as he did not want the opposition to take advantage of (BN’s) internal disunity to win.

Last May, Sarawak Social Development Minister Tan Sri William Mawan Ikom announced his decision to leave the Sarawak Progressive Democratic Party (SPDP) of which he was president, to set up Parti Tenaga Rakyat Sarawak (Teras) with several elected representatives from the party.

Answering a question on the possibility of the state election being held this year, Adenan said he still had a lot of matters to attend to.

Meanwhile, Adenan was reported by the paper as saying more than 300,000 members of PBB were recorded in Sarawak this year but about 20,000 have yet to register as voters.

“We also held a campaign to increase our membership and also launch our website,

http://www.pbb.org.my, which provides an online registered link for the simple recruitment of new members without excesive bureaucratic red tape,” he added.