Forest fires spread over 500 acres in the north of Sarawak have raised air pollution to hazardous levels today in areas close to the inferno, government data showed. 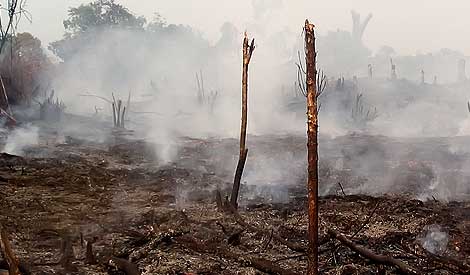 The fires have spurred an emergency response from the state fire and rescue department, which is at the same time scrambling to manage nearly 8,000 people displaced by floods in Sarawak’s southern region as of Monday morning, according to Bernama

Sensors located in the coastal town of Miri – which is closest to the fires – registered an air pollutant index reading of over 300 parts per million (ppm) as at 9am, though it went down to 185 ppm as at 3pm, the data showed.

Readings above 300 ppm are deemed a health hazard.

State Fire and Rescue Department director Nor Hisham Mohammad told Reuters that the situation in the north of Malaysia’s largest state is ‘quite bad’ and expects the fires to rage for a ‘minimum of one week’.

Sarawak’s forests are renowned for being home to eight out of the world’s 54 species of hornbills, according to the Sarawak Forestry Corporation, and also to the Orang Utan in some regions of the Bornean state.

Nor Hisham said the fires are unlikely to have affected the local wildlife as their numbers would be small because most of the timber in the area was already harvested.

The fires, however, forced local authorities to evacuate 650 students from an industrial training centre on Sunday, but classes have since resumed on Monday morning, Nor Hisham said.

Nor Hisham said a total of 50 personnel along with two helicopters and two excavators have been deployed and are working round the clock to contain the fires.

The fire and rescue department believes local hunters had started the fires, but are still investigating the matter.

Meteorological Department senior officer Mohd Hisham Mohd Anip said the severity of the fires was caused by the El Nino weather phenomenon, which typically affects the northern region of Sarawak and the neighbouring state of Sabah.

Forest fires have increased in frequency over the past few years in Sarawak, where there are large tracts of peat soil.

This year’s forest fires, however, cover more than double the 200 acres in the same region scorched by forest fires in July last year. – Reuters